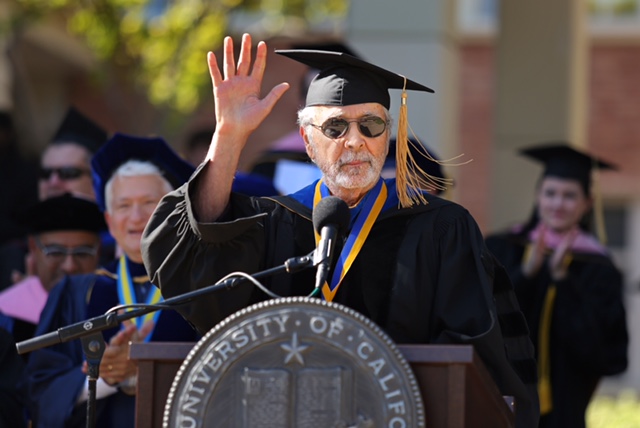 Herb Alpert, the nine-time Grammy winner and philanthropist, received the UCLA Medal in recognition of his transformative leadership in the arts and arts education. The medal was presented by Chancellor Gene Block at the UCLA Herb Alpert School of Music’s inaugural commencement on June 16.

“Herb Alpert has dedicated his life and career to the arts and to our greater good,” said UCLA Chancellor Block, who presented the award. “His transformative leadership in the arts and arts education embodies and amplifies UCLA’s highest ideals.”

Alpert first gained fame as the trumpet player, songwriter and leader of Herb Alpert & the Tijuana Brass, bringing Latin sounds into the pop music limelight in the 1960s. He has had five No. 1 albums and 28 albums on the Billboard album chart, 14 multiplatinum albums (sales of 2 million or more units) and 15 gold albums (at least 500,000 units). In all, Alpert has sold 72 million records worldwide, and he is the only artist in history to have both a No. 1 vocal record (“This Guy’s In Love With You,” 1968) and a No. 1 instrumental (“Rise,” 1979) on the Billboard charts.

In 2014 he received a Grammy for best pop instrumental for his album “Steppin’ Out,” and he continues to tour regularly with his wife, Grammy-winning singer Lani Hall, and his band. In addition to his career in music, Alpert is a noted abstract expressionist painter and sculptor, and he has exhibited his work in the U.S. and Europe.

“Lani and I treasure our involvement with UCLA,” Alpert said. “We have enormous respect and admiration for the university’s deep commitment to public education, to its role in fostering trail-blazing research, and to helping serve diverse communities in so many important and thoughtful ways. I am honored to receive the UCLA Medal and to be recognized for sharing the values that this world-class institution represents and celebrates.”

From 1962 to 1989, as co-founder (with Jerry Moss) of A&M Records, Alpert supported the careers of legendary acts including Janet Jackson, Quincy Jones, Carole King, the Carpenters, Cat Stevens, Joe Cocker and The Police.

In the 1980s, Alpert began to devote himself to philanthropy in support of artists, arts education, and compassion and well-being. Launched in 1988 by Alpert and Hall, the Herb Alpert Foundation creates opportunities that enable people of all ages and socioeconomic levels to harness their creativity, develop their talents and lead more productive and fulfilling lives. The foundation’s core philosophy — that art has the capacity to transform lives — guides its selection of grantees, from small, local grassroots efforts to those operating on a national level.

In 1994, the foundation initiated and funded the Herb Alpert Award in the Arts. The program, administered by the California Institute of the Arts, presents five awards each year to risk-taking, mid-career artists in dance, film and video, music, theater, and visual arts. Past recipients include UCLA professors Catherine Opie (visual arts, 2003), Victoria Marks (dance, 1997) and David Roussève (dance, 1996).

The UCLA Herb Alpert School of Music was established in 2007, and it was named for Alpert in recognition of a generous gift from the foundation that year. The school operated under the auspices of the UCLA School of the Arts and Architecture until 2016, when it became the University of California system’s first standalone school of music.

“It is fitting that Herb Alpert receives the UCLA Medal at our inaugural commencement,” said Judith Smith, the school’s founding dean. “His passion for music education and abiding commitment to enabling young people to realize their potential are invaluable to the education we provide at UCLA.”

In addition to its support of UCLA, the foundation endowed the Herb Alpert School of Music at CalArts, and it supports numerous nonprofit arts programs, such as P.S. Arts/TakePart, which offers high-quality arts education programs to children in underserved public schools in Central and Southern California. The foundation also awards scholarships to high school students in seven arts disciplines through the Herb Alpert Scholarships for Emerging Young Artists at the California State Summer School for the Arts, and it recently established an endowment to provide free tuition and private lessons to music majors attending Los Angeles City College.

In 2012, Alpert received the National Medal of Arts from President Barack Obama for his extensive contributions to the arts.

The UCLA Medal was established in 1979 and is the highest honor bestowed upon an individual by UCLA. It is awarded to those who have not only earned academic and professional acclaim, but whose work demonstrates the highest ideals of UCLA. Past recipients include music luminaries Ella Fitzgerald, Henry Mancini and Quincy Jones, as well as writer Toni Morrison, President Bill Clinton, architect I.M. Pei, basketball coach John Wooden, Supreme Court Justice Harry Blackmun and UCLA alumna and astronaut Anna Lee Fisher.